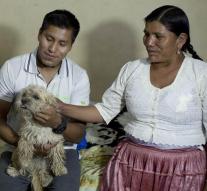 - One of the survivors of the plane crash with Brazliaanse Chapeco Armenian football team on board, is back home. Erwin Tumiri was Tuesday discharged from hospital in the Colombian Medellin and sat a few hours later at home on the couch in the Colombian Cochabamba.

The 25-year-old board technician who will recover fully, could greet his sister Lucia and also closed his dog in his arms again. Tumiri says he does not know why the flight, which departed from Brazil, did not stay in the north of Bolivia. The plane had to be refueled there. Just before the crash, the pilots reported a lack of fuel.

The director of the Bolivian airline LAMIA was arrested Tuesday in connection with the crash in which 71 people were killed.