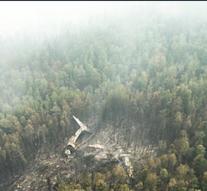 moscow - The crash of the Russian cargo plane Friday where at least eight people were killed, did not come by a technical fault.

This is evident from the data from the black box, says Minister Vladimir Puchkov Tuesday morning (local time). Then what is the cause of the crash is still under investigation according Puchkov.

The device disappeared Friday from radar during a firefighting mission. Sunday the fragments of the Ilyushin 76 were found in a wooded area near Irkutsk. Only the tail was still intact.

The Ilyushin 76 is a device that can be used for various purposes. The Russian air force this type of aircraft used include Syria.