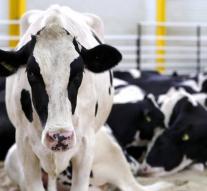 doha - A group of 165 dairy cows fled to Qatar, boycotted by four Arab countries in the fight against shortage of dairy products. The animals come from Germany and arrived on Tuesday with a plane from Hungary, CNN news transmitter reported Wednesday. There will soon be more cows from the Netherlands.

The dairy company Baladna in Qatar, threatened by Arab boycott, wants to fly 4000 dairy cows to provide more than one third of the need for milk. The cows must come from the Netherlands, the US and Australia.

Qatar was until recently for a third of its food dependent on neighboring Saudi Arabia and neighboring United Arab Emirates. Together with Egypt and Bahrain, those two have cut off the relationship with Qatar.

In early June, the countries led by Saudi Arabia broke all ties with Qatar. The reason was quarreling about Qatar's quirky policy and, above all, excellent relations with Iran. Qatar operates, among other things, with Iran a large natural gas field in the Persian Gulf. The Sunni Arabs ruling the Gulf States see Shiyan Iran as a great danger.