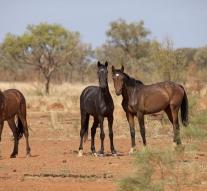 sydney - Cowboys on horseback formed the centerpiece of a demonstration Tuesday in the center of the Australian city of Sydney. The Cowboys were protesting against the plans of the state of New South Wales to complete 90 percent of the 6,000 wild horses in the Snowy Mountains.

According to authorities, the animals ruin the vegetation and waterways in the national park. Within twenty years should be reduced their number to 600. Opponents believe that the animals referred to in the vernacular 'brumbies', belong to the Australian folklore and called on the leadership of the state to wipe the plan of the table.