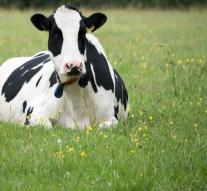 - There was even a police helicopter to pass to detect the cow, but could not. The animal did what criminals on the run rarely get things done: escape. The cow had every reason for a flight because she had gone off on the premises of the slaughterhouse in Kaiserslautern.

Motorists saw galloping to their surprise, the brown cow through the streets towards the center of the German city. The alerted police gave chase, the cow did occasionally run away beyond, even on the track. But she could not reach her. And so it came to pass on a helicopter. But even that had to adjust when the animal disappeared proper exit strategy applied and trace in a dense forest.

The search was then broken off.