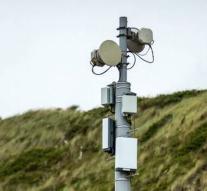 the hague (afn) - The government will require telecom providers in the future to offer in all inhabited areas fast internet in the Netherlands. This nationwide coverage obligation will be imposed in future auctions of mobile frequencies, such as those for the new 5G internet. This was announced by the Ministry of Economic Affairs Friday.

Minister Henk Kamp branded access to fast wireless internet earlier this month to 'basic', but then it was not yet clear what consequences it would impose. The now announced coverage obligation is the first concrete expression of this announcement.

' Our goal is that everywhere in the Netherlands always at least one network for mobile telephony and internet is available, '' says Kamp. Everywhere a reliable and fast mobile connection, according to the minister ' important for consumers and businesses. ' ' Without this technology stagnates our economy. ''

The successor to the current 4G technology is still in development, but in Groningen already experimented with 5G. It is expected that the going rates for the new, high-speed Internet around 2020 in sales.