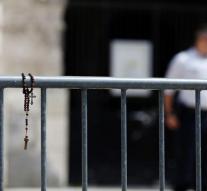 - The French authorities have firmly put a nephew of one of the men who brought a priest to life in a French church. A twenty-known attacker Abdel-Malik Petitjean is locked, the prosecutor confirmed in Paris Sunday.

The thirty cousin Petitjean, Farid K., is suspected of links to terrorists, in order to commit a crime. The 20-year-old Jean-Philippe Steven J. would have tried to travel Petitjean in June to Syria. The duo is in protective custody.

Petitjean and Adel Kermiche fell in late July the church in Saint-Etienne-du-Rouvray. There they brought a 85-year-old priest died. The police shot the duo later died. The two perpetrators said to act on behalf of terrorist group Islamic State.