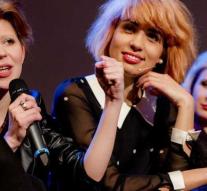 strasbourg - Russia has to pay three members of Pussy Riot a compensation of thousands of euros. The European Court of Human Rights (ECtHR) ruled that the rights of women have been repeatedly violated during their trial. The activists would also have been disproportionately severely punished.

The band members were arrested in 2012 after having performed a 'punk prayer' in the Christ-Savior Cathedral in Moscow. In that performance they criticized Vladimir Putin. Two members of the group were detained for almost two years because of the incident. A third band member was released after seven months.

The human rights court ruled that prison sentences are not in proportion to the seriousness of the offense. For example, the Russian judges left it to study whether the behavior of women could be seen as a call to violence. The court ruled that Russia must pay a compensation of 16,000 euros to the two women who were the longest detained. The third activist must receive 5000 euros in compensation.