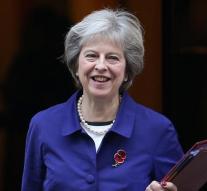 london - A British court, the High Court does rule Thursday in a case about who formally starts in London with the departure of the country from the European Union (brexit). Disputed whether the government itself can take the step, or that parliament should do it. According to stakeholders, the verdict at 11:00 (our time).

The Conservative government of Prime Minister Theresa May assumes that it is the job of the government. Opponents of the brexit try with legal procedures to obstruct the departure from the EU. In parliament there is no clear majority for brexit, which the British decided by referendum.