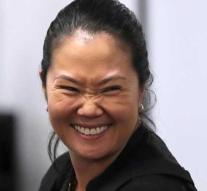 lima - A Peruvian court ordered the release of opposition leader Keiko Fujimori, the daughter of former president Alberto Fujimori. The lawyer of the politician had argued that there is no question of flight danger.

Keiko Fujimori was in custody since October 10. She is suspected of having received illegal campaign contributions from the Brazilian company Odebrecht in 2011, pivotal to a series of corruption scandals. Fujimori lost the election in that year of Ollanta Humala, who was president until 2016.

The father of the 43-year-old politician is also stuck again. Alberto Fujimori was serving a prison sentence for crimes against humanity when he got pardon earlier this year. That has since been reversed by the Supreme Court.