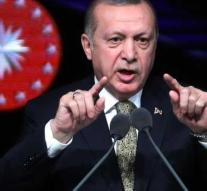 brussels/luxembourg - The billions of accession aid that the EU has given Turkey to adjust its laws have had only a limited effect. The European Court of Auditors concludes that in a report.

Between 2007 and 2021 it is more than 9 billion euros. Much more attention should have been paid to 'essential reforms' in the field of the rule of law. These include independent and impartial justice, combating corruption and organized crime, press freedom and strengthening civil society organizations.

The European Commission recognizes that progress in these areas has been unsatisfactory for years due to a lack of political will by the Turkish government. Brussels will have to spend the money much more targeted from this year on and also impose conditions so that Ankara actually reforms, says Bettina Jakobsen. If reforms fail, funding should be suspended.

Projects in the area of ​​customs, employment and taxation were slow, but they did contribute to the adaptation of Turkish legislation to EU law. Ankara did have political will for that, but these results probably do not last, according to the court.

The thwarted coup d'état of 2016 aggravated the situation, the auditors say. The Turkish government has since then massively laid off or prosecuted alleged opponents, suspended civil servants and silenced journalists and civil society organizations.

There is much dissatisfaction among the 28 member states. Negotiations between the EU and Turkey on accession have been stalled for some time, but there is no interest in ending the Turkish candidacy for EU membership. The country is considered too important for the fight against illegal migration and terrorism.

However, in October the EU heads of government gave the European Commission the task of critically examining the pre-accession aid. Prime Minister Mark Rutte then said that there is no support for the Dutch proposal to close the money tap completely.