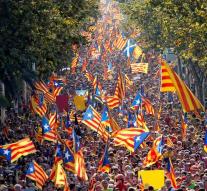 - The regional government of the Spanish Catalonia may not adopt measures with the aim to break away from Spain. According to the Constitutional Court is illegal. The Catalan parliament had contested measures approved last year.

The measures would call Catalan government bodies are created to replace the existing national institutions. That is contrary to the Spanish Constitution and therefore the measures are illegal, according to the court.