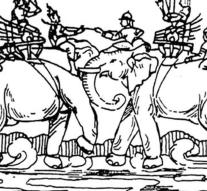 bangkok - From our editors abroad

In 1593, the Thai king Naresuan knew an invasion of his country by preventing Burmese troops by defeating the Burmese crown prince Mingyi Swa in a game of elephants. That's at least some Thai students learn at school about the Battle of Nong Sarai. Outside Thailand is strongly doubted about this lecture.

And in Thailand now too. Sivaraksa was charged yesterday for insulting the monarchy because he called Thai three years ago to be critical of their own history. Among other things, he placed his question marks on the description of the Battle of Nong Sarai, as described in the Thai history books.

With this, Sivaraksa offended the royal house, according to the Thai Public Prosecutor. The elderly critic finds himself just doing his duty: 'Maybe they do not like me to refuse to shut up. But I speak the truth. '

The lawyer of Sivaraksa also doubts whether a distant forefather of the Thai king falls under the law against the insult of the royal house. According to the lawyer, it is up to each Thai to determine whether dead kings are protected by law. His client will therefore be defended against the charge. A new meeting with the OM is scheduled for December 7th.

The members of the royal house have moreover the status of saints in Thailand. Anyone who is somewhat critical about the king or his family will get a suit on the pants. It's only gotten worse since the current military junta came to power in 2014. Since then, as many as 93 litigation have been brought about alleged insult to the royal house. Human rights organizations claim that the junta wants to silence their critics in this way.