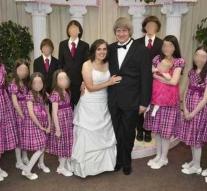 huntsville - Louise (49) and her husband David Turpin (57) held special sexual preferences. That tells the woman's sister to different American media. The couple from California who for years kept their thirteen children in prison, would have had regular sex with strangers.

Teresa Robinette, Louise's sister, remembers how her sister told about a risky appointment she had with an unknown. 'She boasted about how she and her husband met a man in Huntsville, Alabama. Afterwards David brought her to a motel where she had sex with the unknown man. '