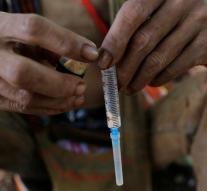 seattle - A young couple in the US state of Washington has three children aged two, four and six years of heroin administered by syringe. The 24-year-old mother and one year older father previously been indicted. They were then released on a bail of $ 100,000 pending trial.

Their children had been removed from his home last November. The Social Services met in the neglected house include aluminum and traces of heroin. In the two-year-old daughter the prick of a needle were found. The six year old son of the couple told the police that the parents of the children injected with a mixture of white powder and water. They called it a 'drug to feel good. '

He and his two sisters were then always immediately asleep. In a drug test were indeed found traces of heroin at the two girls, not the boy.