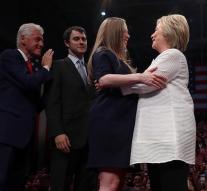 Chelsea Clinton and her husband Marc Mezvinsky announced this Saturday. The baby name Aidan. The couple has been married since 2010 and had a daughter Charlotte in 2014. They live in Manhattan, New York.