Home / World / Coup Perpetrators get CNN Turk from the air 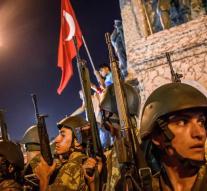 - Turkish soldiers who rebelled against President Recip Tayyip Erdogan have Saturday morning the CNN Turk channel taken off the air. Which reported the announcement via Twitter. The big American brother CNN Turk confirms the news.

Friday soldiers occupied the offices of the Turkish state broadcaster TRT. There they forced a presenter under threat of a gun to the reading of a statement on behalf of the coup plotters. In it they claimed to have taken control. Several hours later, the station was in the air again.