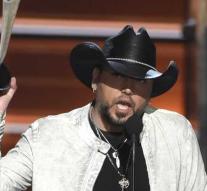 - At the start of the presentation of the Academy of Country Music Awards in Las Vegas, a number of stars staged Sunday night at the shooting in that city last October, where 58 visitors of a country festival perished.

Jason Aldean was the first musician who spoke during the tribute. He was on stage on October 1 when Stephen Paddock started shooting at the crowd from the nearby Mandalay Bay Hotel. 'Tonight we wanted to start the show with something that shows how it is for our country music family to be back in Vegas for the first time,' he said.

'We first thought of doing that with a song, but it is so much bigger than a simple song. It is everything you will hear tonight. The numbers that get us from the chairs, so you want to attract someone to you, or just want to enjoy them in the moment. Nothing can take that away from us. '

A large number of stars had pinned a pin in the form of the figure 58 during the award show to commemorate the victims. Some also carried a pin with the figure 851, for the number of wounded in the shooting.