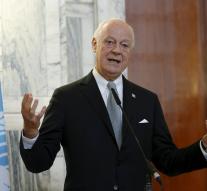 rome - Italy is organizing in January a meeting in Rome with several countries for the fight against the Islamic State. That the Italian Foreign Minister, Paolo Gentiloni, said Monday.

According Gentiloni discuss land at various places on the right strategy. " There are several scheduled meetings, one of this is about six weeks in Rome ", said Gentiloni.

Italian Prime Minister Matteo Renzi said Sunday that Italy still does not intend itself to join the US-led coalition to attack ISIS goals in Syria. According to him, this leads only to more chaos in the country.