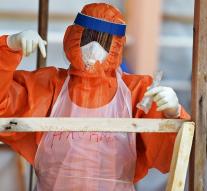 dakar - The three West African countries that lie at the heart of an Ebola epidemic , have since the outbreak in March 2014 for the first time a week no new cases registered .

More than 11,000 people have died from the epidemic in Guinea, Liberia and Sierra Leone in which the worst outbreak of ebola until now.

But recovered in the week ended October 4, no new cases reported to the World Health Organization (WHO).