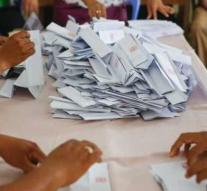 phnom penh - Cambodia has to restore the largest opposition party, release an opposition leader immediately and ensure that the upcoming elections in July are fair and credible. A group of 45 countries urged the Asian country.

According to, among others, the United States, Germany, Australia and the United Kingdom, optimism has given way to 'deep concern' about the human rights situation in Cambodia. The countries' declaration was read by the United Nations Human Rights Council.

The Supreme Court in Cambodia disbanded the most important opposition party CNRP last year. The leader was also arrested. The authorities in his country accuse the politician of having conspired with the US to seize power. He can get up to 30 years in prison.