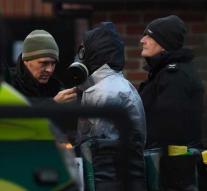 prague - Sweden and the Czech Republic have reacted irritated to Russia's speculation on Saturday that the nerve poison novitsjok used in an attack on a former spy in England may come from one of these countries. This is an 'absurd accusation', said the Czech Minister of Defense Karla Slechtova. The Swedish Foreign Minister Margot Wallström called the claim 'unacceptable and unfounded.'

A spokeswoman for the Russian Foreign Ministry had said earlier on TV channel Rossija 24 that Great Britain itself, the Czech Republic, Slovakia, the United States or Sweden are the possible countries of origin of the nerve gas.

The Czech Republic says it strictly adheres to the requirements of the Chemical Weapons Convention and only deals with the protection against such drugs. The Czech Foreign Minister Martin Stropnicky also protested against the allegations 'that can not be proven anywhere. 'He saw in it an attempt to manipulate public opinion, he wrote on Twitter.