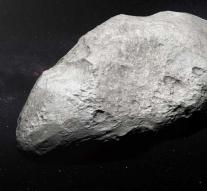 london - Our solar system appears to have an immigrant. It is a rock that came from outside our system and stayed here. It is the first time that such a \u0026 aposoid has been found.

The boulder is contrarian. All planets rotate in the same direction around the sun, and the moons and most rocks do the same. They follow the direction of the gas cloud from which they arose 4.5 billion years ago. But (514107) 2015 BZ509 goes the other way. That indicates that he comes from somewhere else.

It is not the first time that an object was found that comes from outside our solar system. Last year was also seen such a boulder, 'Oumuamua called, but that was' passing through' and will fly away in a while.