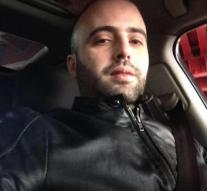 brussels - The victim of the failed attack in Brussels-Central Tuesday evening was known for a drug crimes of 2016. The mayor of the Brussels municipality Molenbeek, Françoise Schepmans, said on Wednesday. She could not give details about this.

The shot man, Oussama Zariouh, was registered in his home in Louis Mettewielaan in Molenbeek since 2013, according to Schepmans. In the district where Z. lived, they do not often have problems. 'We have administratively checked 20,000 people in Molenbeek and I have not reported any information about him. 'Schepmans further said that the man was divorced.

The Public Prosecutor had previously reported that M. was not in the books as rationalized or terrorist suspect. According to Belgian media, he has been charged with criminal offenses, but that has not been confirmed.

The police in Molenbeek, according to some, a breeding test for Islamic radicalism, will receive thirty man reinforcement on Wednesday. 'The struggle against radicalism remains the priority of Molenbeek,' said the mayor. 'This attack makes our determination to continue the fight against radicalism and terrorism only increase. '