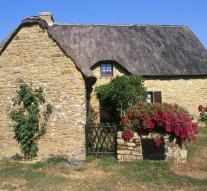 brussels - While house prices in the Netherlands are increasingly attracting in France and Italy still showed a decline.

That according to the latest figures from Eurostat, the European housing market.

That is true of the eurozone economic recovery is also evident from the fact that house prices have risen over the past year by 1.1 percent , but in each country the differences are still large. Thus, house prices in France fell in the last twelve months by 2.2 percent and were homes in Italy even 3 percent cheaper. Figures about the Greek housing market were not disclosed. In Spain, by contrast , where prices in the crisis very strongly went down , recovery is visible with a price increase of 4 percent over the last year, or almost twice as much as the 2.4 percent that Dutch houses rose in value. Really robust growth in housing prices, however, in countries like Sweden ( +13 percent ), Ireland ( +11 percent ) and Denmark (+ 7.5 %).