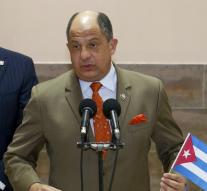 havana - Costa Rica wants to work with Cuba to find a solution for the thousands of Cuban refugees stranded in the Central American country. The topic is on the agenda of the two countries. That said Costa Rican President Luis Guillermo Solís Monday at the start of his several-day visit to the Cuban capital Havana. Tuesday he goes with his counterpart Raul Castro to talk about it.

In Costa Rica are estimated at about 6,000 refugees permanent. They try on land to reach the United States. But that moment is difficult. The number of asylum seekers in Costa Rica rose sharply after neighboring Nicaragua, which lies to the US on the route, in mid-November closed the border for migrants. Costa Rica hopes that Belize will open the borders so that the Cubans their trip to the US that way to continue. The countries are negotiating about. If Belize open borders, the Cubans through an airlift should be brought to the country as Belize is not a neighbor.

The wave of refugees is likely to have a reaction to the better relationship the US and Cuba. Cubans fear that by the restored diplomatic ties soon not get as easily as before a residence permit for the USA. A special law passed in 1966, under which Cubans who illegally enter the country is still able to settle in the US, may be revoked.