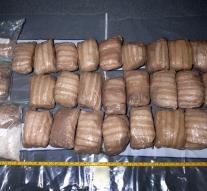 - Police in Costa Rica have arrested seven suspected members of a drug gang. The suspects are from Costa Rica and Cuba. The gang is intertwined with the Mafia from Italy's Calabria. The investigation group was initiated after it was found in the Netherlands last year 3.5 tons of cocaine in a container from Costa Rica, the newspaper Diario Extra reported Thursdays.

A special anti - mafia unit of the Italian justice is long engaged with the case. The headquarters of this branch of the Ndrangheta ( Calabrian mafia) was located in a pizzeria in New York. The owner, Gregorio Gigliotti was already detained in March. Gigliotti had a " coordinator " between Italy, the USA and Costa Rica traveled to regulate the cocaine smuggling.

This man has been arrested in Italy . The Italian authorities consider that especially this kind of lucrative cocaine business to the Ndrangheta in a position to outflank the Sicilian Cosa Nostra colleagues . The gang smuggled cocaine from the Central American country under a cloak of companies that exported pineapples and cassava , reported the Costa Rican Prosecutor Jorge Chavarría.