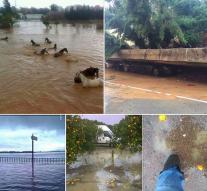 marbella - Even after tonight is one big drama on the Costa del Sol, where since yesterday by extreme rainfall the whole area is flooded. 'There still find rescue site to rescue dogs, cats, horses and donkeys from shelters. 'I'm going to Los Barrios because there are still three hundred dogs up to their necks in the water,' says Peter Koekebakker from La Linea which yesterday had to save himself in his animal shelter 'Animal In Need' hundreds of animals from drowning.

'I can not even reach our shelter. But our animals from drowning more anyway, so I'm going to help somewhere else. The next few days we need to urgently deposit six truck sand to raise the many different ends for us yet in a drama. The fuse box has been destroyed and two refrigerators which are in vaccinations and blood tests are also broken. The damage is huge. But rescuing animals is the most important. '

Many people are without electricity. 'That's all laid out here so unprofessional,' Koekebakker continues. 'RCDs do not know here. This area is not built for such rainfall. It is not called here for nothing Costa del Sol. '

The Dutchman Erwin Gerlach at Malaga Airport with a parking lot where many Dutch second home owners park their car. 'My happy place is a little higher so our customers do not have to worry, but many colleagues are the cars to the rear in the mud,' he says. 'The airport is also accessible only via the new road. Tunnels, viaducts you can not go through it. You really need a 4wheel drive all-terrain as you need on the road. '

Mariska Turkenburg and Jan Blind manage complex Luny Mar Golf in Estepona. 'Our garden has turned into a wild water park, swimming pool and a mud pool cellar and elevator shaft are flooded,' says Mariska. 'Homeowners call us with concern. We try to correct the most serious leaks and water damage. All we can do at the moment. It is still raining. The next few days or weeks we will have our hands full cleaning up the debris. '

According to Spanish media, this is the worst rainfall in 30 years. Meanwhile, there are two people deceased. A young woman drowned in a low-lying area in a catering business in Estepona and an electrician died when his car was hit by a tidal wave. Police and firefighters had to rescue dozens of people and their pets. Using helicopters were people on roofs of houses and cars to safety. Schools remain closed today in the area.