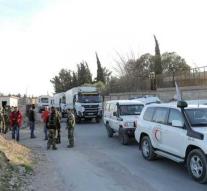 beirut - A convoy of relief goods entered the northern part of the jihadist stronghold Oost-Ghouta on Thursday. The International Red Cross reports that the convoy consists of 25 trucks. Together they deliver 340 tons of food.

The Red Cross and the Red Crescent are working together with the United Nations in providing assistance. High UN adviser Jan Egeland had already reported Wednesday that the Syrian authorities agreed to send a convoy.

Since the start of an offensive in mid-February by the Syrian army, more than 1100 civilians have been killed. According to some estimates, as many as 400,000 citizens will get stuck in East Ghouta, which now consists of three surrounded areas as a result of the army offensive. In the northernmost area, the former suburb of Damascus, Duma, are the most citizens.