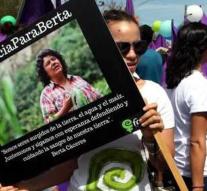 tegucigalpa - A court in Honduras Thursday found seven men guilty of the murder of the prominent environmental activist Berta Cáceres, in 2016. In January, the sentence is known. The seven are at risk of imprisonment up to thirty years.

Two men are also at risk of a higher sentence, because they were also found guilty of attempted murder of the Mexican activist Gustavo Castro, who was with Cáceres when she was attacked. A suspect was acquitted. The supposed brain behind the murder, a former director of power company DESA, is being tried separately.