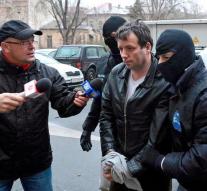 - A Romanian hacker who claimed that he had cracked the mail servers of the US presidential candidate Hillary Clinton, was sentenced Thursday. Marcel Lazar Lehel, alias Guccifer, received 52 months in prison in the United States. Justice denies that Clinton was among the victims.

Guccifer admitted that he penetrated to the mailboxes and accounts on social media about a hundred Americans. He cracked the mailbox Sidney Blumenthal, an adviser to former President Bill Clinton. Blumenthal emailed regularly with Hillary Clinton when she was Minister of Foreign Affairs. That was among more about the attack on a US consulate in Benghazi. By that hack was revealed that Clinton had used a privémailadres instead of her official government account.

Another victim, according to justice,, an immediate family member of two former US presidents. ' This is probably Dorothy Bush Koch, daughter of George Bush sr. And sister of George W. Bush.


Guccifer made the emails, medical information, financial information and private photos of his victims public.

Guccifer was found guilty of computer intrusion and identity fraud. Guccifer had received seven years in prison in 2014 in Romania. After sentencing, he was extradited to America.