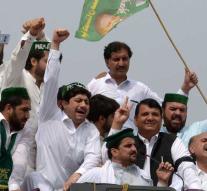 lahore - Pakistani former Prime Minister Nawaz Sharif and his daughter Maryam are on their way to Pakistan. They are expected to be arrested immediately upon their arrival in Lahore. A Pakistani court sentenced the duo to years of imprisonment.

The authorities have taken extensive security measures to prevent Sharif supporters from advancing to the airport. They have closed roads with shipping containers and partially dismantled mobile telephony in the city. Thousands of agents have also been mobilized.

Sharif has been Prime Minister of Pakistan three times. The Supreme Court dismissed him in 2017 because he had concealed income. An anti-corruption court in Pakistan last week imposed the prisoner and his daughter prison sentences of ten and seven years respectively.

The return of Sharif from Great Britain comes at a sensitive time. Pakistan goes to the polls on July 25th.