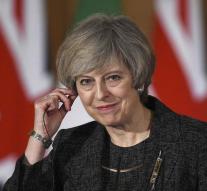 belfast - The talks between the Northern Irish Democratic Unionist Party (DUP) and the Conservative Party of British Prime Minister Theresa May have so far been positive. They will continue. That's what DUP leader Arlene Foster said on Monday.

The British Tories require the support of unionists, with ten deputies represented in the House of Commons, to get a working majority in parliament. The government leader elected election victory last week but was deceived.

Foster goes to London to talk on Monday night. She did not want to explain what the Christian conservative DUP wants in return for the May help. This has to delay her Queen's Speech, the opening speech in which she sets out the plans of the new cabinet, awaiting the outcome. 'It is clear that we can not approve the last details of the speech unless the deal is there,' said the experienced minister Damian Green.