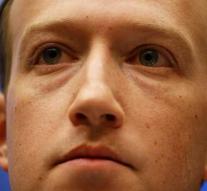 brussels - The conversation between Facebook CEO Mark Zuckerberg and parliamentary leaders of the European Parliament can be seen on Tuesday for the public. Parliament President Antonio Tajani announced that on Twitter.

Tajani personally talked to Zuckerberg about it and calls it 'great news for European citizens', 'I am pleased to announce that he has agreed.'

The conversation is about the misuse of personal data from millions of users collected by the British company Cambridge Analytica to be used in election campaigns. That the conversation would not be public before, led to a lot of dissatisfaction among left-wing and liberal MEPs. Tajani had reached agreement with Facebook about the form of the conversation after long negotiations. That would be behind closed doors, with only the fraction leaders. Tajani would then report back to the press.

The President of the Parliament thanks in his tweet the respect that Zuckerberg has shown to the European Parliament by agreeing to live stream the conversation. That is planned for the beginning of the evening.