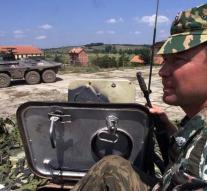 brussels - The biggest Russian military exercise in years begins Thursday. Thousands of men and women from Russia and Belarus participate in the eastern flank of NATO countries and in the Russian Exclave Kaliningrad in Zapad (West).

The inconvenience of the expected power show is particularly high in Eastern Europe. Lithuanian minister Raimundas Karoblis (Defense) acknowledged that it is difficult to keep the head cool. 'There is a large foreign army contracted outside of Lithuania's territory,' he said.

Top officials from Estonia and Ukraine earlier expressed the fear that Moscow would leave troops in Belarus after the exercise. 'There is no guarantee that everything returns to Russia,' said the Ukrainian President of Poroshenko.

How many men participate in the exercise is the subject of discussion. German Minister Ursula von der Leyen (Defense) spoke about 100,000 men, but according to the Kremlin, there are about 12,700.

The number of men is also important because of international agreements. Member States of the Organization for Security and Cooperation in Europe (OSCE), including Russia, have agreed that more than 13,000 military international observers should be allowed.