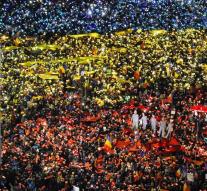 bucharest - Also Sunday, tens of thousands of Romanians in Bucharest and other cities took to the streets to protest against the Social Democratic government. They kept pieces of paper in the colors of the Romanian flag and lit up with their mobile phones. They carried signs with the call 'Resist' and they chanted 'We want work, not watch you.'

The government of Prime Minister Sorin Grindeanu called public anger late last month in an attempt to weaken a campaign against corruption. The contested decision has now been reversed, and its author, Justice Minister Florin Iordache, resigned. But the protesters continue to demand that the whole government step down because they can not be trusted.

In the capital Bucharest Sunday came a thousand counter-demonstrators on the leg. They blamed President Klaus Iohannis, who supports the protest movement, splitting the country.