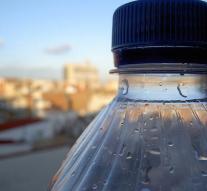 barcelona - Thousands of people in the northeast of Spain have become ill after drinking water that was contaminated with particles of human feces. The Guardian reported Tuesday according to local health authorities which 4146 people in Catalonia have been treated with symptoms such as nausea, vomiting and fever, which causes the so-called norovirus.

The contaminated water was drinking water coolers in offices. According to Albert Bosch, professor of microbiology at the University of Barcelona, ​​which is investigating the outbreak of massive stomach flu, it is the first time that norovirus bottled water was found.