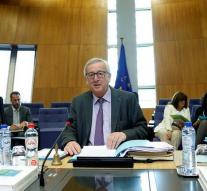 brussels - The President of the European Commission, Jean Claude Juncker, has all his officials and commissioners a presidential ban 'imposed on contacts with representatives of the United Kingdom.

Jean Claude Juncker:,, I do not shadow boxing and cat-and-mouse games. There must not create the impression that obscure negotiations occur in back. 'He said this Tuesday in a turbulent European Parliament, which debated the departure of the British, in the presence of all 28 EU commissioners.

Juncker called on British Prime Minister David Cameron as soon as possible to clarify his position regarding the upcoming separation. He said,, somewhat surprised 'that does not happen the same.,, We can not live with a long period of uncertainty. I'm not a slave to the financial markets, but did they have in mind. '


Later in the day, the EU leaders meeting. they also have the Brits called quickly to activate the treaty article which can begin negotiations on the separation conditions.

Juncker also turned to a number of British MPs from the eurosceptic corner.,, I'm surprised you're here. You fight for the Brexit. This is the last time you applaud here. '

Subsequently, the committee turned his gaze to the future.,, We need less bureaucracy. Europe should be more social and more and that will happen. The EU remains a peace project and a project for the future. '


,, This is not the time to break the continent into pieces, 'Juncker concluded.,, I'm not sick like newspapers or write. I will commit myself to my last breath for Europe. '