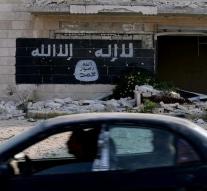 rabat - The Moroccan authorities have arrested an alleged intermediary between the Islamic State and a terrorist cell dismantled in France. He had, according to the Moroccan Interior Ministry to the Turkish-Syrian border to receive instructions he had to pass on to the jihadists.

The man, according to a source within the security services of Moroccan nationality and lived in Spain. He had reportedly passing messages from the terrorist group, the seven suspects last month were arrested in France. With these arrests is foiled a possible attack by the French authorities.

'When the suspect saw that the group was arrested in France he came through Turkey to Morocco,' the source said. There, the authorities beat him at the airport in handcuffs. He was, according to the ministry originally planned to travel with a forged passport to France.