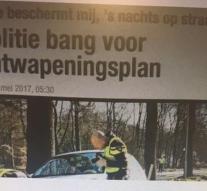 the hague - Police corps leadership today deals with the Police Police Central Works Council (COR) about the unrest and dissatisfaction that comes with the plan to disarm police officers. The matter has been put on the agenda promptly after reporting in The Telegraph.

This is evidenced by a message on Intranet, the imagery and confidential communication channel of the national police, which has been featured in this newspaper. There is a plan to disarm part of the nearly 200 members of the Traffic Accident Analysis (VOA).

A significant part of this group is opposed to the plan. They have frequent aggression in traffic and fear to become a walking disco if they are on street for example at night. The group also finds it incomprehensible that in these times of terrorist threat police officers are disarmed.

Because there is great dissatisfaction and division among the VOA police officers who are part of the Forensic Detection service, 'the subject is now parked', as stated in the message on Intranet. The COR wishes to clarify the corps manager about the intention. According to the organ, there is a lot more to do. 'There are more issues in the file,' says the message.