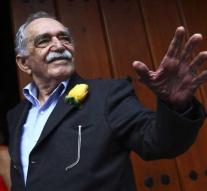 bogota - Kidnappers in Colombia have claimed 4.4 million euros in ransom in exchange for the release of a great cousin of the world famous writer and Nobel laureate Gabriel Garcia Marquez who died in 2014. The police announced that on Wednesday.

34-year-old Melissa Martinez Garcia was taken in August by a group of armed men who stopped her in her car in the city of Santa Marta in the north of the country. 'We think this is a common crime,' police said. He received two calls in which the money was demanded.

The woman is the granddaughter of Jaime, the brother of Gabriel Garcia Marquez.