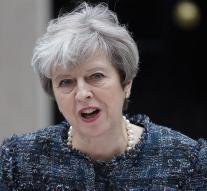 london - The Conservative Party of Prime Minister Theresa May made a big profit at local elections Thursday in parts of England, Scotland and Wales.

The conservatives can count on a hundred seats in the local councils, as evidenced by the first exit polls on Friday morning. Big loser is the UK Independents Party. The pro-brexit party, which scored four years ago, was almost wiped out, mostly by the Conservatives.

Also the biggest opposition party Labor did not have a good day, although the loss was lower than previously feared. But especially in Scotland, Jeremy Corbyn's party must take into account that she loses seats at the Scottish National Party.

Counting the votes is still in full swing. Only final results will be announced until Friday. On the 8th of June, the British will be allowed to vote again, then for the election of a new Lagerhuis. In the polls, the Conservatives go well here too.