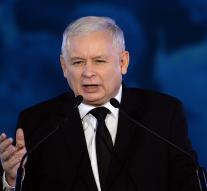 warsaw - The conservative and eurosceptic party Law and Justice (PiS) of former Prime Minister Jaroslaw Kaczynski is the big winner of the Sunday parliamentary elections in Poland. According to official results published Tuesday PiS won with 37.6 percent of the vote 235 seats in the Polish parliament, the Sejm, which counts 460 members.

Since the fall of communism in 1989, no party has such a big election victory achieved in Poland. The party that ruled the country for almost forty million eight years, the liberal Civic Platform of the current Prime Minister Eva Kopacz, received 24 percent of the vote. This is now the second party has 138 seats in the Sejm.