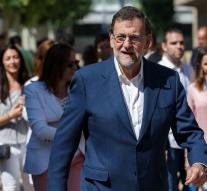 The party won 136 seats, against 123 in December last year. Because of the political division managed when not to form a coalition and so the Spaniards had to again make the polls.

The counting of Sunday night, after it had counted more than 90 percent of the vote. The parliament has 350 seats.


The Socialists fall back from 90 to 86 seats. The radical left party Podemos remains almost certainly stable with 71 seats. Liberals Ciudadanos fall back from forty to 32 seats. The rest of the seats appear to be spread over a number of smaller parties.