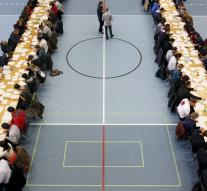 bern - The Swiss go to the polls Sunday to two hundred members of the National Assembly , comparable to our Lower House to choose. There are also 45 seats for the Ständerat , the Senate , at stake.

According to the polls, the national-conservative SVP has the best credentials to become the largest party.

In the National Assembly would make the SVP chance almost a third of the vote. The right-wing liberal FDP is heading , according to the research off to a good score.

The SVP pleaded in the election campaign including for limiting the number of immigrants and a clampdown on people who abuse facilities for asylum seekers.