Home / Tech / 'Congratulations that land has not been hit heavier' 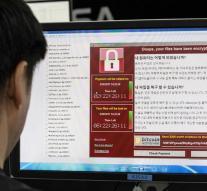 the hague - It is a good fortune that the Netherlands has not been affected as much by the hostage software WannaCry as, for example, Great Britain. State Secretary Klaas Dijkhoff (Security and Justice) said on Tuesday at the opening of the major One Conference on Cyber ​​Security in The Hague.

Dijkhoff answered the question of how our country is affected less than some other countries. 'I can not say that the United Kingdom is a non-cyber-aware country,' said the Secretary of State. 'So I think it's happiness in part. ''

According to him, it is not good to think that the Netherlands would be less vulnerable than other countries. 'There are malicious people who will use any vulnerability they can find in any country. ''

Minister Henk Kamp (Economic Affairs) pointed out that in the Netherlands, public services such as the National Cyber ​​Security Center (NCSC) and the business community work well together to combat threats. According to him, the cyber security sector has grown very rapidly in our country.

The minister said that the Netherlands is dependent on digitization for its future prosperity and employment. ' And there will be no digitization without cyber security ''.