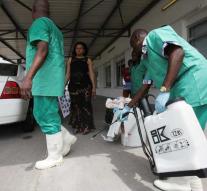 Ebola was probably back in the African country in December. Then residents of a village showed signs that they might have been infected with the virus. Since then, at least seventeen people have died, but it has not been established that Ebola was the cause of death.

The Ministry of Health reports Thursday that at least eleven people are now infected. This includes three doctors. The virus lasted in 2014 in the west of Africa. Because of that epidemic many thousands of people died in Guinea, Sierra Leone and Liberia.