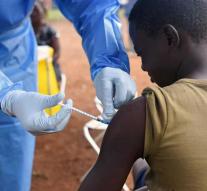 kinshasa - The Congolese authorities have given the green light for the use of four new experimental drugs against Ebola. The last outbreak of the deadly virus has so far cost the lives of dozens of people in the African country, which is about sixty times as large as the Netherlands.

The authorities began administering the new mAb114 drug to ten patients earlier this month. They have since gone through a 'positive evolution', says the Ministry of Health. The four other tools that may now also be used have been developed by companies from different countries, including Israel, the US and Japan.

Meanwhile almost 1700 people have been vaccinated with a drug from the pharmaceutical company Merck, which has previously proven to be effective. The vaccine has been administered to care providers and people from the environment of patients. Ebola is contagious. Over 11,000 people died during a previous outbreak in West Africa.