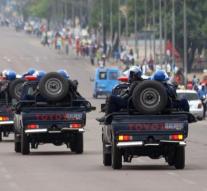 - The violent protests in the Congo have taken the past two days to 32 lives. Among the dead, according to the police 28 civilians and four policemen. The opposition and human rights organization Human Rights Watch reported Tuesday whether a higher death toll.

The protests are directed against President Joseph Kabila. The demonstrators are furious about plans to postpone the presidential election. They see in it an attempt by Kabila to remain after the expiry of his term in December to power.