Home / World / Confrontation with defaulter goes out of hand 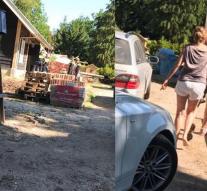 Robbert S. from 't Gooi has left behind a trail of financial misery for years. He orders goods and services for small businesses and individuals for tens of thousands of euros but does not pay home if the bill has to be paid.

When crime reporter John van den Heuvel confronted him with his wandering, he fled a toilet. After the broadcast on Telegraaf VNDG on Friday, a group of deceased people recovered from the shelter of S. The confrontation ran out of hand when S. with a brick plunged the carriage of one of his victims. The alerted police then took Robbert S. to the desk where he spent the night.

Saturday will be returned to S. by the deceased. Earlier reports on justice about S. were filed because, according to the Public Prosecutor, there are civil disputes. However, S. has been sentenced by the civil court to pay substantial sums to his victims, but the notorious default payer lays most sentences.

The full video report about Robbert S. is available at Telegraaf VNDG.